We are pleased to announce the dates for selections for senior mens, mixed and 23&U for the 2017 Australian Championships.

All trials to be held at Banyule Netball Stadium.

Pre-registration is available via TryBooking – https://www.trybooking.com/MXYX

Please note: The same pre-registration link is used for registration for both junior and senior dates. Please refer to the flyer for dates of your specific trials.

It’s an exciting time for Victoria, with dedicated junior selections for our 17&U and 20&U teams running over the next two weeks.

Pre-registration is available via TryBooking 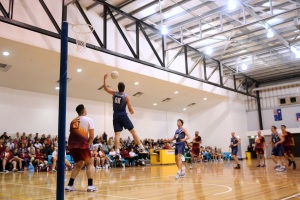 Victoria has teams competing in all seven divisions of the championships, and is well placed to feature in all seven Grand Finals.  The premier division of the comp, the Open Men’s sees Victoria sitting atop of the table with a

perfect record of 6-0 record.  These boys have secured spot in Fridays Qualifying final, and must be confident of winning straight through to Saturdays Grand Final.

Victorian Mens and Mixed Netball is proud to announce its new partnership with Blackchrome Sportswear for 2016 and beyond. Assisting in the development of our new playing gear Blackchrome will help to supply playing and training uniform over the coming years.

We look forward to strengthening a positive relationship between Blackchrome and Men’s netball in Victoria and working with them into the future.

New playing gear will be available this year. #Excited

Victorian netball is in for a change with the unveiling of a new look Men’s and Mixed Netball Squad.

The Squad will take on a new logo and playing strip which was lead by our current playing members to replicate the feelings of what it means to represent Victoria.

With a sense of pride in representing Victoria and a desire to win for our state, our warriors will wear the new apparel for the 2016 Men’s and Mixed Netball Championships and look to bring home the title in all divisions.

To get behind our squad at the championships be sure to visit the 2016 Championships Website for further information.

Both our 20&Under sides are hosting a Trivia Night to raise funds for their Nationals campaigns, on Saturday February 29th. If you'd like to come along or organise a table, please get in touch with Craig Moore (@craig2805 or VicePresident@VMMNA.org)!
Our 20&Under, 20&Under Reserves, and Reserves 2 had their training camp down at Phillip Island over the weekend - a huge thank you to the Phillip Island Football Netball Club for the use of their courts! 🙌 #AMMNAChamps2020 #MensNetball #Netball
Boys Emerging Talent Academy (BETA) is back in 2020 and now at FRANKSTON and WERRIBEE! BETA is an official pathway program run by the amazing team at @inspiresportsgroup2011. The academy is designed to help young athletes progress through the Victorian Men’s and Mixed State Team Program. More details can be found here: www.inspiresportsgroup.com/boys-netball-pathways Register for Frankston: https://www.trybooking.com/BICOF Register for Werribee: https://www.trybooking.com/BICOJ #BoysNetball #MensNetball #MixedNetball #Netball
A huge congratulations to Julia Woolley who has been elevated into both the 2020 @collingwoodsn Squad and ANL side. This will also see her compete in the @supernetball pre-season competition too. Julia most recently played in the 2019 MLeague season in the Premier Mixed division (finishing Runners Up with the @geelongnetball) and has also previously represented our Victorian Open Mixed team and Australian Open Mixed side. This is long overdue recognition for an outstanding netballer who has worked tirelessly both on and off the court (all the while raising 2 small children!). We wish Julia all the best for the season ahead! 🙌 #Netball #MixedNetball
The Fast'N'Furious Netball Championships, VMMNA's Junior Netball Tournament, is happening on Sunday February 23rd at the Hoppers Crossing Netball Association (Heaths Rd, Hoppers Crossing). . Registration is currently open across 5 divisions (Mixed: 13/U, 15/U, 17/U, 19/U and Boys: 17/U). . REGISTER NOW: http://bit.ly/38hmqoR (or link in bio!) MORE INFO: http://bit.ly/2LNoKdN Thank you to Hoppers Crossing Netball Association and Wyndham City Council for their support of this tournament. #Netball #BoysNetball #MensNetball #MixedNetball #NetballTournament
A reminder that this Sunday is the LAST DAY UNIFORMS CAN BE ORDERED! There will be no extensions. To help with sizing, we will have uniforms to try on. All orders go through the online order site (link found on our FB page) - which will be live until after this date. Please also note that all players need to put the Surname they would like printed on bags and playing tops in “instructions for seller” when ordering. All teams are back at training this Sunday, unless advised otherwise. Also the Fitness Testing date has changed to February 16th - this is compulsory for all players. #MensNetball #MixedNetball #Netball #AMMNAChamps2020
Our incredible sponsor @citysidesports have converted their Australia Day Holiday Netball Tournament in Richmond (Ladies and Mixed), to a Charity Tournament to raise money for the recently set up Victorian Bushfire Appeal. Register your team or yourself to be placed into a team now: www.citysidesports.com/tournaments This is such great work from the very generous team at CitySide and special shout out to their amazing Director (and coach of the Victorian and Australian 17&Under sides) Geoff Taylor! 🙌 #MensNetball #MixedNetball #Netball #CharityTournament
The Boys Emerging Talent Academy (BETA) is on again for 2020! Run by our junior pathway partner @inspiresportsgroup2011, BETA is designed for boys aged 12-16 wanting to take their netball to the next level. The Academy will run from May to September in preparation for the 17&Under Victorian State team trials. Register now at this link: https://www.trybooking.com/BHISG For more info please email: admin@inspiresportsgroup.com #BoysNetball #MensNetball #Netball #AMMNAChamps2020
Hear from our President Matthew Blomeley as he updates us on all the happenings for VMMNA over the past few months and what's coming up in 2020! Just go to VMMNA.org or our FB page to read it! VMMNA hopes you have a safe and happy break and we'll see you all in the New Year! 🎄🎅🙌 . #MensNetball #MixedNetball #Netball

Error: Twitter did not respond. Please wait a few minutes and refresh this page.