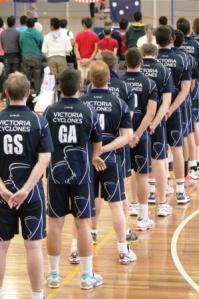 For the 3rd successive year, Victoria took out five of the six titles up for grabs at the 29th Australian Men’s & Mixed Netball Championships.

Leading from the front, the Cyclones Open Men’s team went through the tournament undefeated, winning their 5th title in a row, and have now not dropped a match the past four championships.  Whilst that stat is impressive, the Mixed team have a similar record.  They took out their 6th successive championship, not having dropped a match over those 6 tournaments.

The level of excellence was similar across the remainder of the squad.  The 23 & Under Cyclones regained the title that they last won in 2010 despite spirited competition from the Vic Development team, who were runner up.  The 19 & Under division was again taken out by the Vic’s for the 7th successive year, whilst the Vic 17’s were never troubled throughout the week, winning the 17’s division for the 7th year in a row.

The only division Victoria missed out on was the hotly contested reserve’s.  Despite being the 7 time defending champs, the Vic’s were runner-up to a very good NSW side.  The Reserve division was a hotly contested grade, with 11 teams fighting it out, including 4 visiting international sides from Malaysia and Brunie.

Complimenting the team success, Victoria had more reason to celebrate at the post championship Presentation Dinner.  600 guests were on hand to congratulate no less than 56 squad members achieving national team selection.  The Vic’s were also most proud of the following individuals: